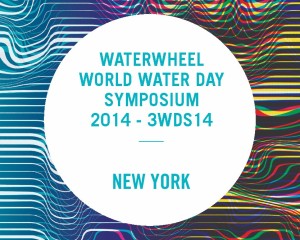 Ear to the Earth is a worldwide network for environmental sound art based in New York City. This node will involve live performances, artist talks and research presentations inspired by the 2014 theme exploring the extremes and contrasts of water though sound. The works will feature field recordings from rural lakes in Australia, the depths of the Indian ocean and the sounds of cracking ice in the Arctic. This node also includes the HydroSonics lab, an intuitive improvisation featuring musicians from across the world responding to water. HydroSonics was curated by Leah Barclay for the 2014 Water Water Day Symposium.

In March over 200 scientists, academics, artists, architects, urbanists, engineers and activists from 30 countries came together for the 2014 World Water Day Symposium.

As an element, water embodies extremes and contrasts: oceanic depth or shallow rivulet, transparent or opaque, flowing or still. Water cycles through the living systems of the planet: water bodies, life forms, atmosphere. Climate change has produced global water extremes in terms of sea level rise, polar ice disappearance, floods, droughts and desertification. Is water a shared resource or a commodity that is bought, sold, owned and wasted? While we might not all share the same perception of water, exploring deeper connections to it may facilitate a greater understanding of how our collective views have influenced actions and decisions about water.

3WDS14 explored questions about how we are living, and will continue to live, with water and its contrasts. There is a demand for new perceptions and approaches to water management, urban planning, and cooperation, as well as for a renewed respect for water as a vital resource and shared heritage.

HydroSonics, spanned two sessions, hosted at NYU Steinhardt, curated by Leah Barclay, and produced by Ear to the Earth, was a worldwide network for environmental sound art based in New York City. The 6-hour programme was split into two parts with artists of high caliber. Very verbal, the online audience commented (here in italics) on the amazing quality of the performances. Riveted and transfixed, they wondered when to take a break to not miss anything.

SESSION 39 kicked off with the Australian Voices live. They premiered Leah Barclay’s new work ‘Distill’. Transported into a ‘quiet nature’, people appreciated the human voices mixed with field recordings of the Amazon river, rendering a textured and dense landscape with so many nuances. Then, an improvisation took place between musicians in NY and Mahesh Vinayakram in Chennai. In the previous session, Mahesh sang a carnatic shloka (South Indian chant) dedicated to the water of the sacred Ganges River. He also played morsing (mouth harp), with enchanted listeners feeling ‘blessed’ and ‘so impressed to see and hear all these performances from all parts of the world’. ‘Yes! Amazing! Connecting people through art and science…connecting continents and communities.’

Feelings of being embraced by nature triggered auditive sensitivities with David Monicci’s composition ‘Stati d’Acqua’. ‘I LOVE THIS SO MUCH! this person is very talented with water recordings and filters!’ typed one person, and another being inspired said ‘great soundscape for film, dance and life in general… could be great to collaborate’.

Fernando Godoy’s audio-visual treat ‘Hidrofonias: 607kms’, based on field recordings collected on three rivers and a glacier in Chile, suggested an ‘immersive web painting’, ‘so organic’, ‘like cells’, ‘like a birth’, ‘…a creation’.

Julie Rousse and Jacques Perconte gave us a foretaste of ‘Mille Lumiere’, one hour before their concert in the Poitiers’ Planetarium. After collecting images and sounds of the city, they processed them live, projected in HD on the hemispheric screen of the planetarium. Deconstruction of matter, granulation, playing on digital compression… a contemporary rendering reminding me of artworks from the 70’s using photocopies of photocopies. Link between pixels and H2O molecules, fluidifying digits through the various states of water… so many interpretations came to mind.
‘One has the impression of being in a cave on a boat’, ‘transported in vegetal and cosmic universe’, ‘Water dust‘, ‘Glitches from universe, in between black holes’, ‘visually impressionistic’, ‘bound by water’.

Sergey Jivetin’s ‘Voluminous HydroLogic’ inspired by the fragility of the equilibrium of the hydrologic cycle, was an installation using medical tubing filled with water, run by a peristaltic pump and powered by solar energy. First shown in a hospital, it was meant for patients as a meditation piece, to alleviate their anxiety. A fantasmagoric perfusion machine, modified to run with the air bubbles: ‘water going through life support drip?, ‘our blood system’, ‘The machine looks alive :)’, ‘white noise & blue blood’, ‘so peaceful and mesmerising!’

The diversity of HydroSonics was stunning. Some commented that the second part, the finale of the symposium, was ‘good for radio’, with Leah as a dynamic announcer. However we definitely experienced an internet event, not only webcast, but with an interactive and very active audience online, and present in NYU too.

Joel Chadabe introduced Ear to the Earth: ‘We view environmental art, in sound and image, as vibrant and engaging communication. Sound communicates the way we feel about something. Image makes the ‘something’ specific.’ He then invited the public to listen to Garth Paine’s ‘Presence In the Landscape’ and the premiere of Eric Leonardson’s ‘Awash on the Lake’. Paine’s field recordings, gathered while kayaking in Bundanoon (NSW), plunged everyone into ‘very subtle’ ‘morning sounds from Australia’, merging with our actual morning sound in the Pacific: ‘if I turn it (the computer sound) up through the window maybe a chorus of birds will arrive’, ‘Now, you must imagine it’s not afternoon, nor night for us, it’s early morning, sunrise and you listen to these birds outside’ typed someone in Argentina.

Eric Leonardson’s piece evoked Lake Michigan’s landscape, from its depths to its amplitude and force. ‘Atmospheric’, said a person in Cairns. ‘Will be great if the Tap can go mobile and we can be participants in journeys through the territory.’ ‘I liked Eric Clapton. From now on, I like Leonardson as well!’ responded someone else.

Ricardo Dal Farra prepared ‘Conciertos Imaginarios’, a playlist consisting of composers and students from Canada and Argentina. The last track was a pearl despite its subject ‘Mosquitoes’ by Joao Fernandes.

‘Interesting to listen to the mosquito work, distanced from health issues that it represents dengue fever, malaria, ross river fever etc.’ ‘Yes but look at the bright side, you can listen the mosquitos music without these diseases :)’

Nicholas Ng and Amber Hansen performed ‘Remembering Chinaman Creek’, a tribute to Chinese Australian heritage, as more than a few creeks are named as such in Australia, after gold miners and market gardeners. Amber and Nicholas used traditional instruments, some drums dipped in water, as well as Chinese chant. They took us on a voyage, allying past and present in their sounds, producing visual ebbs and flows with silk ribbons in an exquisite choreographed improvisation. ‘These two are visual also ..so a plus for them :)’, ‘I can feel a chinese dragon here and now’’, ‘Great choreography’, ‘such a treat’, ‘very evocative’.

Toby Gifford and Simon Linke welcomed us outdoors, under a beautiful blue sky, on the Brisbane river bank. They gave us an insight of the ‘water liveness’ with a hydrophone, ‘fishing sound’. ‘The point of our group is to reconnect with the environment in tangible embodied ways’ said Toby. ‘Audio witness, sound as environmental evidence.’, ‘Excellent!’

The final performance paid homage to rivers across the world, with a live mixed improvisation in NYC – including Joel Chadabe, Tom Beyer, Leah Barclay, field recordings, live percussion and electronics. Leah was commenting ‘the voice you hear now is Lyndon Davis from Gubbi Gubbi country on the Noosa River, Australia. …Now we are at the pamba river in Kerala, South India.’ ‘Travelling’ responded someone in the public. ‘What a wonderful journey!’