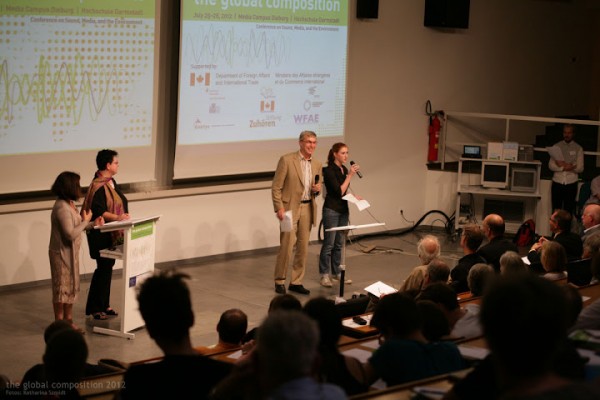 Posted at 15:58h in Performances, Research by admin
Share

In July 2012 Leah Barclay presented a paper and an artist talk at the Global Composition in Germany in addition to performing Rivers Talk, her new collaborative electroacoustic composition with Ros Bandt.

No sound exists on its own: The Global Composition

“Sound is ubiquitous and permanent, and embraces us as an envelope. Therefore, the experience of the auditory can be considered an environmental experience par excellence. The term and concept of soundscape reflects this idea. It implies, that sounds do not exist in isolation, and have to be understood as being embedded in and interacting with other sounds and perceptions coining the perceptional abilities of individuals and societies and their social relations: soundscape is a system in which all elements are interdependent.

Considering the world’s objects as instruments, its inhabitants as their players and all sounds on the globe taking place simultaneously, leads to the imagination of a global composition. Any audible phenomenon is part of this huge ongoing concert which includes all living beings and unites them in – mostly unintentional and uncoordinated – collaboration. Soundmakers, listeners and those, requesting sounds as a commodity, are part of a system and often one and the same person.”