“Look at the plan of London through the ages. What is it that has remained constant throughout? The river Thames. … yet sadly, the city has until now looked away from its river rather than look at it” (Sinha-Jordan 2005).

As a pilot project for River Listening, the River Listening team was invited to develop an audiovisual installation at the 25th Anniversary of Electronic Visualisation and the Arts (EVA) in London, July 2014. Based on a live hydrophone audio-stream from the Thames, the installation deliberately inhabited a liminal space at the arts-science nexus, seeking to highlight the positive contributions each domain can have on the other, and document an emerging model of aesthetic-scientific exploration.

Listening to the Thames explores real-time hydrophonics as a means to revealing the hidden world beneath the river surface. Drawing on ‘holistic’ bioacoustics approaches to ecosystem health assessment it adopts a creative approach to an informative audio-visual interpretation of the riverine environment.

In our EVA London supporting paper, Toby Gifford wrote “Since the dawn of agriculture, rivers have been central to civilisation, affording river cities such as London as thriving hubs of commerce. The health of a river and the community it supports are intertwined. We see and smell the river, yet what do we really know of its secrets below the surface? An open wound we may see, and a gangrenous decay we may smell, but who will hear if the river weeps?”. The Thames was a fantastic river to experiment with the possibilities of River Listening, as it is such an iconic river system in one of the worlds most renowned cities.

We spent five days monitoring the sounds of the Thames and discovered it was a very tidal river. Fortunately we were able to install the hydrophones on the HMS Belfast, originally a Royal Navy light cruiser, permanently moored on the River Thames. The live stream was hosted on PlaceStories, and supported by Feral Arts. While I have used PlaceStories for previous river projects and regularly used the webcasting interface, this was the first time we streamed hydrophones continuously for five days.

The live stream formed the foundation for our installation at EVA London, where I composed a series of short soundscapes responding to the Thames that were mixed with the live stream. Toby Gifford created a visualisation of the live stream and we experimented with different diffusion methods throughout the conference. I was particularly interested in gaining feedback online and we used the hashtag #RiverListening to encourage people to listen to the live stream and talk about what they could hear. 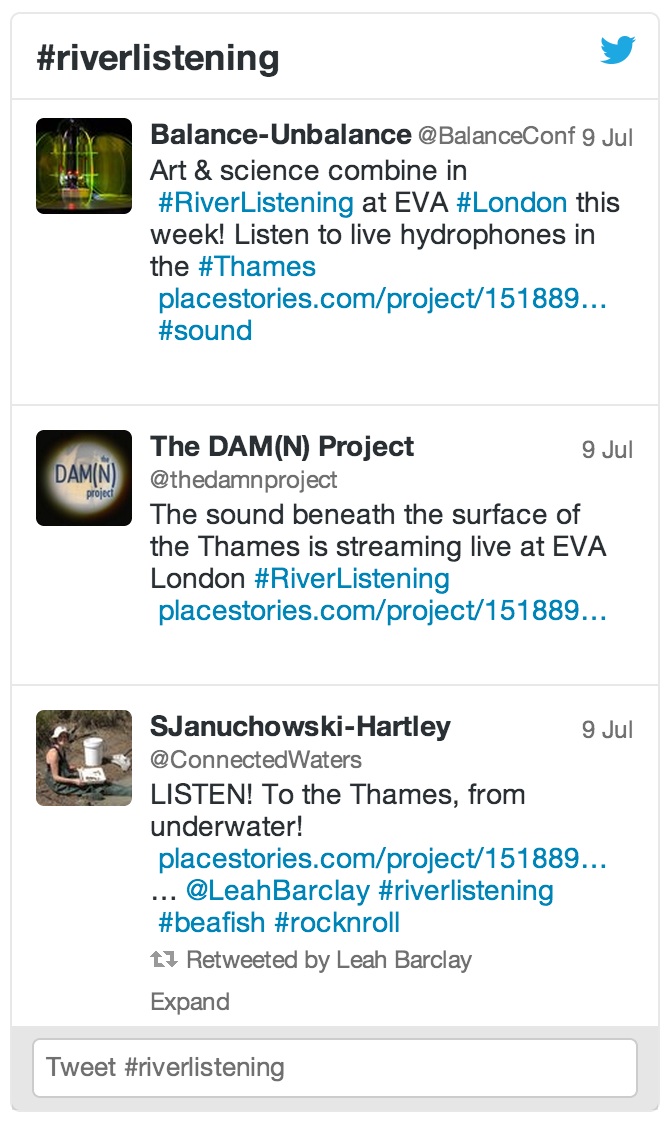 We found that the sound of the Thames was dramatically different from rivers in Australia. While it’s often quite a surprise to hear exactly what sounds emerge once the hydrophones are in the water, the Thames was incredibly loud, to the point that at times it sounded like a busy highway. Many people in London were surprised by the intensity of the sound, and this provided a great starting point to talk about the value of bioacoustics in understanding river health.

The Listening to the Thames project gained the attention of the marketing department at Griffith University and we were happy to be joined by Bridget French, Griffith Sciences Development and Alumni Manager to document and promote the event in London.Griffith University also held a VIP event for Listening to the Thames at the Savoy Hotel to officially launch the project with a guest list that included high profile media identities and organisations associated with river preservation, such as the River Thames Society. Listening to the Thames was a successful pilot for River Listening and certainly highlighted the diversity of global river soundscapes, the emerging interest in acoustic ecology and confirmed that in our current state of environmental crisis, this type of assessment is critical to understanding the rapid ecological changes taking place across the globe. By unveiling the usually hidden sonic aspect of the underwater environment, we hope to increase awareness of the value of aquatic bioacoustics in comparing and gauging the health of rivers.

We hope to return to London and extend the project to multiple locations along the Thames in collaboration with local communities over the coming years, based on the results from River Listening in Australia. 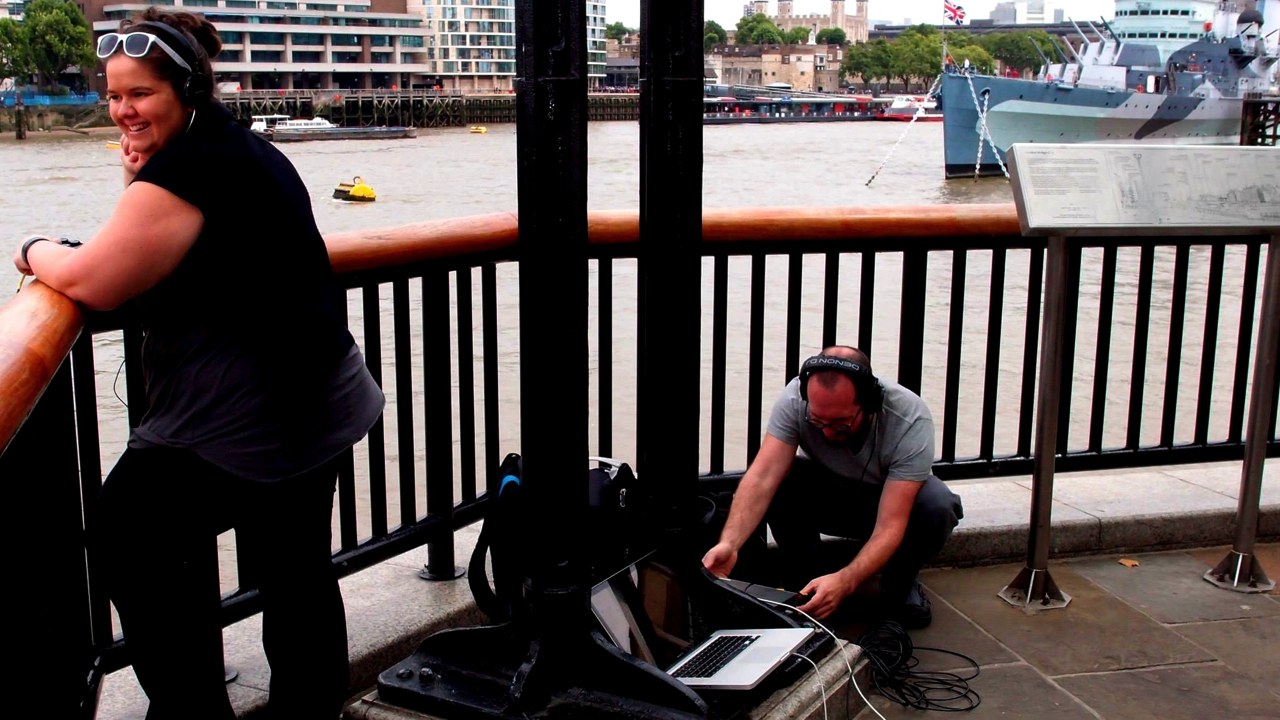 Queensland based science communication researcher Ruth O’Connor also joined us in London. She wrote a short article about the project on her Stream Stories website available online here